If you’re familiar with NeoCon, you know that saying it’s Kind of a Big Deal is an understatement. If you’re not familiar, NeoCon is a commercial design tradeshow. The event’s website accurately describes it as the “world’s leading platform and most important event of the year for the commercial design industry”.  People from around the world travel to this epic event held each June in Chicago’s Merchandise Mart. To put it in perspective, over 500 companies showcase their products and services to 50,000 or more design professionals. All of whom are there to discover, learn, and network as much as humanly possible in a few short days. If this sounds overwhelming, trust me…it is. It’s overwhelming, exhausting, and exciting all at the same time. But, it’s such an important event; many people have been there dozens of times, literally.

This year Lehner Designs sent their two interior designers, me and Stacie, to check it out. What’s interesting is this was the first year Stacie attended, but it was my fifth year. I’d been there four times as a designer and one time as marketing employee of a large textile company, working their showroom and checking out the competition. So we were both excited to attend this year and see what inspired each of us, especially since it was the shows 50th anniversary.  We drove up on a Monday, checked in the hotel and headed straight to the Mart to get started. The energy and chaos was high and there was a ton to see. Halfway through Day 1 though, overwhelm started to set in. That is until we came across the Tackett and Tandus Centavo Showroom.

Normally, commercial flooring doesn’t perk us up so drastically. But, this year their product was so unique and colorful, it was like a little burst of visual caffeine.  To be perfectly honest, what drove us to the showroom were their fun bags (we’re not proud of that). Once there, we became initially inspired by their showroom displays. The oversized spools (below) were impressive, but the threads themselves were gorgeous. Even the neutral colors shimmered. The marketing was spot on as well. The image above shows the vast array of color options in a creative deconstructed way. This collection has four patterns; Tailored, Tailored Bloom, Tailored Plaid, and Tailored Madras. Tailored, a neutral colored large scale abstract plaid is used as the base of each pattern. Bloom, Plaid, and Madras are enhanced versions of Tailored with an added accent bands running along the length of each tile. What was so fun and unexpected is the vibrant color combinations of these accents bands and how they could be used together. Fashion forward combinations of blue and purple, pink and orange, and yellow and gray are just a few examples. These sound like extremely wild colors for commercial carpet tile. Because they’re narrow strips layered over a neutral base it works though. The mix and match patterns and colors are bright but subtle creating a fun bespoke floor pattern.

To take it a step further, Tarkett’s literature explained how they took their inspiration from today’s ‘evolving social fabric’. They refer to this shift in society as the evolution of a Neoculture; a concept that goes beyond diversity by recognizing that society is blending different cultures to define new ones.  This concept is used to frame 4 “major trends” that are shaping our built environment and how society expects to experience them. Projects are becoming more “Purpose Positive” in a “Sub-Urbanization” environment. In other words our suburbs are changing. As cultures blend and expand geographically, they’re repurposing abandoned big box stores into colorful suburban city centers. This is because a NeoCulture’s “Regenerative Generation” is much more focused on our planets “Future of Betterment”.  Basically, people continue to embrace sustainability using their reduced carbon footprint as the new status symbol. This is explained on a theoretical basis of course, but it brings up the question of whether suburbia is changing as much as we think. Maybe we’re simply using different criteria to categorize ourselves and others – to determine our own status and how we evaluate the status of others in our communities? Either way, we support sustainability, value the thought provoking concept, and really really liked this carpet. So much so we voted it our favorite NeoCon product and look forward to seeing more color in the industry! 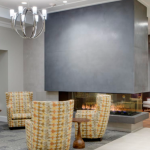 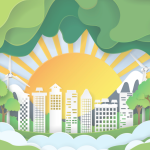